skip to main | skip to sidebar

"I wonder how this flamingo keeps changing colors..." 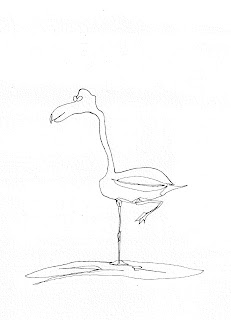 Once upon a time there lived a witch who was hungry so she caught a flamingo and tried to turn it into a plate of good food but instead it turned the flamingo blue and every day it turns a different color.

Well, a long, long time ago there was a powerful wizard and this wizard had a pet quastridge. One day the wizard went to a witch's house for dinner. Afterwards, he asked if she had a recipe for making someone become powerful. She said, "just if you keep a promise." He brought the recipe home. His quastridge was waiting eagerly. The wizard went over to the quastridge and pet it. Then the wizard got to work making the pill that would make him powerful. That quastridge thought that pill smelled so good. The quastridge broke through his cage and ate the pill. It wasn't finished so it made him change colors.

Moral: Never try to be too powerful.

Posted by gatheringwonder at 4:04 PM

This is such a great idea! I love all of the answers you get!

thanks for the visit - yes indeed, I too enjoy what comes out of my kids' imaginations - never a dull moment!

feed the danimal
he likes whimsy...

cut & paste the following code to add the above button to your site:

join in the play of

For the child in us all.
Click the button to find out more and share your whimsicallity...

a glimpse of the whimsy...

click the button below to see a list of weekly competitions and other great blogs to visit...

or use the hash tag #whimwed

What's your favorite word? (may choose more than one)