skip to main | skip to sidebar

This is epic! A wonderfully crafted tale that has stood the test of time as it was first recorded sometime between the 8th and early 11th century - how many books today will still be around 1000 years from now? This edition also has a plethora of critical essays for those who would like to probe the story further (the actual tale is only 78 pages). I read this to my boys as part of our medieval ages study this semester and during the last couple of chapters I invited them to depict an illustration from the story - you can see those below!

Here was my favorite passage from the story. The scene: Beowulf has just come back from killing Grendel's mother and King Hrothgar offers him these words of wisdom (words we would do well to heed in our modern times):

"So learn from this and understand true values. I who tell you have wintered into wisdom. It is a great wonder how Almighty God in His magnificence favors our race with rank and scope and the gift of wisdom; His sway is wide. Sometimes He allows the mind of a man of distinguished birth to follow its bent, grants him fulfillment and felicity on earth and forts to command in his own country. He permits him to lord it in many lands until the man in his unthinkingness forgets that it will ever end for him. He indulges his desires; illness and old age mean nothing to him; his mind is untroubled by envy or malice or the thought of enemies with their hate-honed swords. The whole world conforms to his will, he is kept from the worst until an element of overweening enters him and takes hold while the soul's guard, its sentry, drowses, grown too distracted. A killer stalks him, an archer who draws a deadly bow. And then the man is hit in the heart, the arrow flies beneath his defenses, the devious promptings of the demon start. His old possessions seem paltry to him now. He covets and resents; dishonors custom and bestows no gold; and because of good things that the Heavenly Powers gave him in the past he ignores the shape of things to come. Then finally the end arrives when the body he was lent collapses and falls prey to its death; ancestral possessions and the goods he hoarded are inherited by another who lets them go with a liberal hand. O flower of warriors, beware of that trap. Choose dear Beowulf, the better part, eternal rewards. Do not give way to pride. For a brief while your strength is in bloom but it fades quickly; and soon there will follow illness of the sword to lay you low, or a sudden fire or surge of water or jabbing blade or javelin from the air or repellent age. Your piercing eye will dim and darken; and death will arrive, dear warrior, to sweep you away." (45-46) 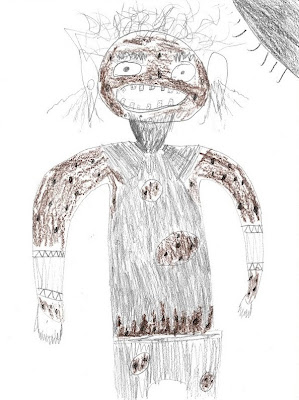 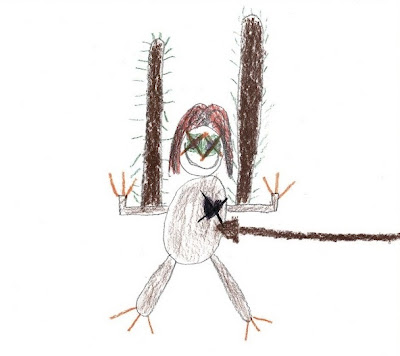 Posted by gatheringwonder at 12:50 AM

I think the boys captured the story. Beowulf was one of my favorites from High School English class.

I think that it is great that you are exposing your boys to the classics early. I read excerpts of the Old Man and the Sea by Hemmingway to my first graders and they loved it!

I was thrilled to see you reading Beowulf. It's such a great story! Love how your kids interpreted it too. I took your quiz. Great words! Found you through AEDM.

I never really knew what beowulf was. I thought it was an animal! You have a great bog and than you for your visit!

feed the danimal
he likes whimsy...

cut & paste the following code to add the above button to your site:

join in the play of

For the child in us all.
Click the button to find out more and share your whimsicallity...

a glimpse of the whimsy...

click the button below to see a list of weekly competitions and other great blogs to visit...

or use the hash tag #whimwed

What's your favorite word? (may choose more than one)